Live Your Dream in Anafi 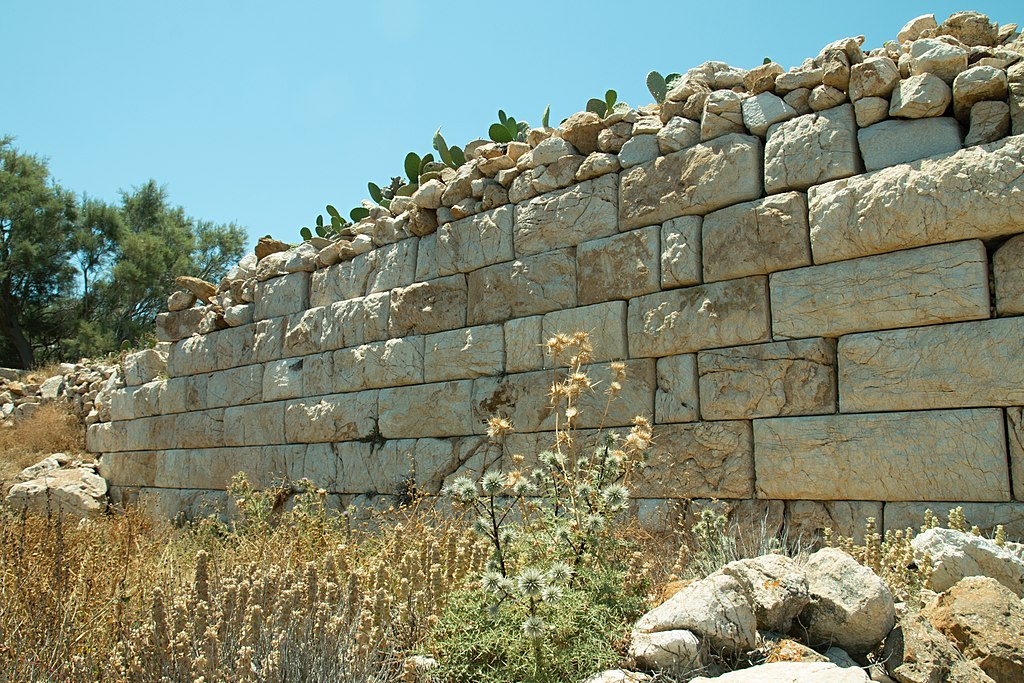 According to mythology, the island was given the name Anafi because Apollo made it appear to the Argonauts as a shelter from a bad storm, using his bow to shed light upon it (i.e. the island name Ἀνάφη is derived from ἀνέφηνεν, lit. ’he made appear’). If the name of the island derives from this word, and means ‘revelation’, then Anafi is linked to Delos, an island whose name also derives from an ancient Greek word meaning ‘to reveal’.

At the monastery of Panagia Kalamiotissa there are ruins of a temple built as an offering to the god Apollo Aegletus. Ruins can also be found at Kasteli, and most of the findings, such as the statues, are now located at the Archaeological Museum at the Chora, in an extremely small room. In Roman times the island was used as a place of exile.

The island was used as a place of internal exile for criminals and political dissidents from the 1920s onward.Tourism developed in the 1970s, particularly after an electricity generator was built in 1974, and harbour works were undertaken. The building of paved roads from the late 1980s onwards not only increased tourism but revived the island’s agricultural economy. There are numerous publications relating to the island from the mid-1960s (see books and articles by Margaret Kenna) and her photographs of the island and migrant communities over the decades since 1966 have been deposited in the Benaki Museum Photographic Archive (located in Kolonaki Square – Filikis Etaireias ). 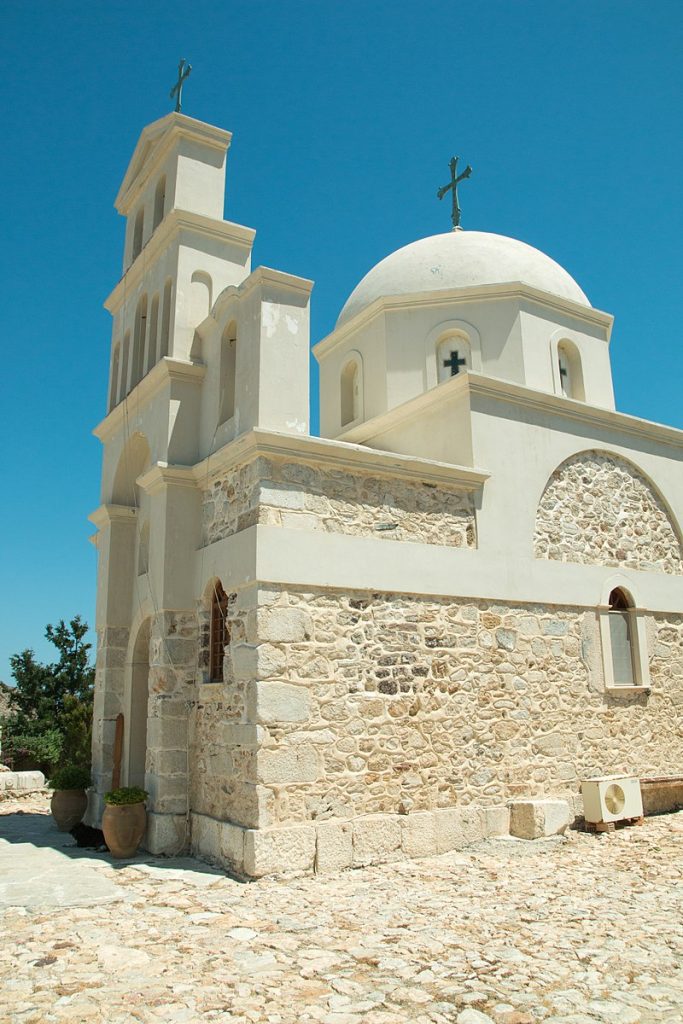 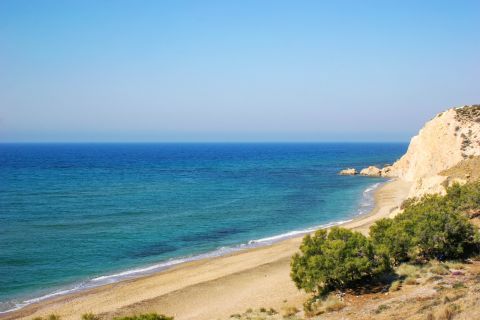 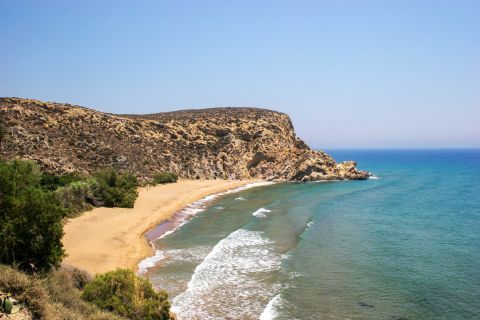 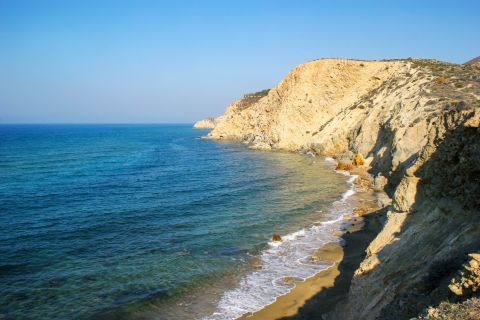 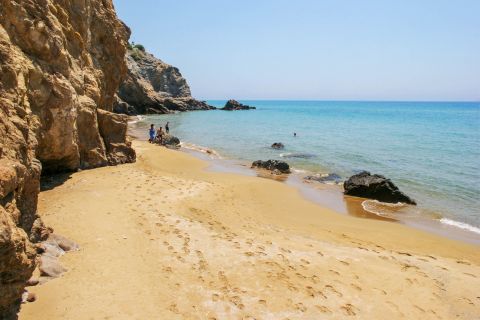 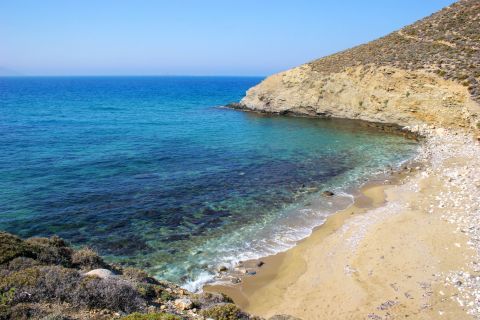 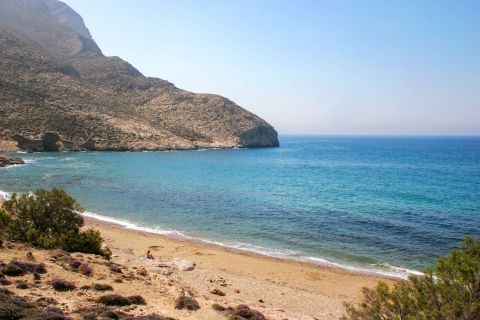 Anafi’s beaches constitute a comparative advantage for the island, in view of its unsullied, exotic character, which attracts visitors who enjoy remote landscapes. At the same time, the rocky coastline is particularly interesting to many categories of visitors.

Starting at the port for a tour along the southern coastline, Kleisidi, a small oasis, offers a splendid sandy beach, accommodation in the form of rooms to let, and local delicacies from its picturesque fish taverns. The next stops, Katsouni, Flamourou and Mikros Roukounas, are remote little coves with fine golden sand and transparent waters.

Megalos Roukounas is the island’s most popular sandy beach, and a major meeting point for summer nature-lovers. It is quite long (around 400 metres) and is the outlet of a gorge that forms a small plain with olive trees and prickly pears. There is a tavern and rooms to let in the area.

The next small beach is Katalymatsa, known from the remains of the ancient port, which can be seen scattered throughout the area.

Megas Potamos is a pebbly beach, formed by the eponymous gorge that forms a deep valley between Kastelli hill and the mountainous range of Chalepa.

Further on, Aghioi Anargyroi is a small beach surrounded by steep cliffs and framed by the eponymous country chapel.

The circular tour of the island’s smooth coastline ends at the small bay of Prassies, former seaport of the Monastery and disembarkation point for pilgrims; the bay is enclosed by the majestic volume of Kalamos.

The circumnavigation of the Kalamos peninsula, is a unique experience for travelers, as the limestone cliffs rise imposingly above the boat, to an altitude of more than 350-400 metres. This site is a special challenge for mountaineers and climbers, as it is a unique venue for both mountain and sea sports.

Continuing the coastal tour to the northwest, visitors will encounter the lonely presence of the tiny Byzantine monastery of Agios Antonios, above a cliff and very close to the sea. This is followed by the coves of Agios Georgios with the eponymous chapel, and Symiakos, at the island’s northernmost edge.

The end of the tour to the west and south brings travelers to the pebbly remote beaches of Kalaggathi (no road access), Prassa, Vagia and Kyparissi.
source-anafi.gr

Care: On the island there is a versatile Agricultural Clinic which also provides medicines.

Piraeus ATM: Located in the Port.

Eurobank ATM: It is located next to the post office in the country.